Though not nearly as often as I should, I occasionally take a break from scripts and write prose. I plan on working on writing more fiction in the near future. Below is a list of my published work and where you can find it.

Available in paperback & ebook on Amazon (2022)

My debut short story collection. Collects 10 years of fiction and includes story notes for each one.

After discovering a tape he’s never heard of at a video store closing sale, a VHS collector discovers that sometimes nostalgia comes at a terrible price in Dead Format.

In Weekend at Escobar’s, a man finds himself smuggling drugs across the border stuffed inside the corpse of a cartel boss he’s trying to pass off as living.

With supplies and hope dwindling as they struggle to survive in a fallout shelter, a mother gives her son one last Christmas in the original short story that inspired the award-winning film, I’m Dreaming of a White Doomsday.

These and more await as you are invited to gaze into the depths of the twisted mind of filmmaker Mike Lombardo, just be careful you don’t tap on the glass, you might not like what you stir up…

I got a random email from fellow Zombie! Zombie! Brain Bang! Contributor John Bruni, who told me that he was in charge of editing the Strange Sex 3 anthology and that not only were submissions restricted to handful of invites, but also that I was being given one of those invites. I nearly declined, thinking that I wasn’t particularly interested in traversing the gore porn world again that I had visited with my entry into the original Strange Sex, but then a couple days later the idea for this story started to take form and I thought I could do something that was disgusting, but also a little comical and embarrassingly autobiographical.

A man uses an internet dating to feed a disturbing appetite.

I wrote Appetites (originally titled “Goregasm”) in October of 2009 for a girl I was dating at the time. I was in the middle of post production on Long Pig and was burning out, so I decided to take a break and switch gears. I mentioned to her that I was thinking about writing a short story or two and she asked me to write something erotic, which was something I had never attempted before. She was an artist whose work often leaned towards paintings of disturbingly surreal and grotesque S&M and I was reading a lot of Edward Lee at the time, so I sat down and wrote Appetites. I’m fairly certain I blushed the entire time. She loved the story and even went so far as illustrating a couple scenes out of it (while sitting in a church in Rome no less).

Outside of drunkenly reading it aloud at parties and delighting in making people psychically ill, I never thought it would go anywhere, until 2012 an old filmmaker friend of mine, Kevin Strange emailed me and said he had started a publishing company called StrangeHouse Books. As luck would have it, their first book was to be an anthology of erotic horror called Strange Sex. I dusted off Appetites, cleaned it up a bit and submitted it. I received an acceptance letter a few days later and Appetites became my first published work. To date I believe it is the most disgusting thing I’ve ever written. 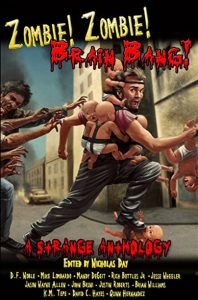 A McDonald’s employee finds himself trapped in the Playplace during the zombie apocalypse.

While PlayPlace was my 2nd published story, it was actually the first short story I wrote since I was in high school. It was May of 2009 and I had been out of school for 4 years. I was still living at home, slaving away at my pizza shop day job, and was starting to panic about my future. I was depressed and scared that I fucked my life up by not going to college (a decision that I now am extremely happy about), and all of these anxieties made their way into the story. Playplace was an idea I had come up with many years earlier when a friend of mine got a job at McDonald’s. I went in one day to visit him and saw him crawling through the playplace tunnels, dirty rag and spray bottle in hand cleaning up a kid’s puke. Needless to say he looked miserable. As I sat and ate I couldn’t stop staring at the entrance to the play area, eventually remarking to another friend that if there was a zombie outbreak, the Playplace would be the safest spot because the zombies wouldn’t be coordinated enough to climb the stairs.

A fun side note about the story is that aside from the zombies, everything else was based on my own actual experiences working in food service. All of the customers were based on real people I had the (dis)pleasure of serving and all of the characters were composites of people I knew. Looking back on it, I consider Playplace to be a companion piece to my short film, The Stall. They both tackle similar themes and the anxieties I had about my job and the uncertainty of my future. I feel that anyone who worked in food service can relate to these two projects.

If given the chance to work with a real budget, I would absolutely love to adapt Playplace as a film. 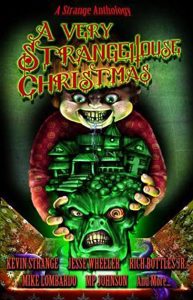 “I’m Dreaming of a White Doomsday”

Available in: A Very StrangeHouse Christmas (2013)

This story, which I ended up adapting for the big screen as the first feature length film from Reel Splatter, was written under some pretty dark conditions. My mom was hospitalized at the time with kidney failure and things were looking grim (she thankfully ended up recovering), I had also recently lost a few friends to cancer and my world was a very dark place. To help stay sane, I poured all of the helplessness  and melancholy I was feeling into a story about watching someone close to you slowly fading away and being powerless to help them. I used Christmas as a backdrop for the story because I wanted to explore the loss of the magic and innocence of childhood, the wonderful years when you are oblivious to the whims of the world and your parents protect you from understanding the reality of things.

It was an extremely difficult story to write, but it was a huge help in coping with the state of my personal life at the time. It certainly had an impact on readers when it was released and I was asked by numerous people if I ever planned on making it into a movie. I figured it would be impossible with the limited budget and resources I had the time, thinking it was far too ambitious until one day I randomly started breaking it down logistically and realized that we could maybe pull it off with enough MacGyver style ingenuity. I sat down and wrote the script, which at the time I foolishly thought was going to be a short film, and the rest as they say, is history. To date it is the most personal and certainly the most pitch black thing I’ve ever written. 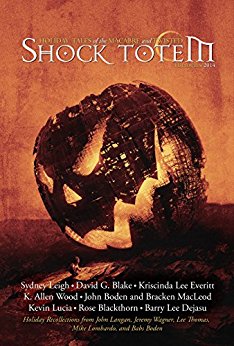 “Flay Bells Ring or: How The Horror Filmmaker Stole Christmas”

Available in: Shock Totem #9.5: Holiday Tales of The Macabre and Twisted-Halloween 2014

Shortly after my work on the collectors edition of Zero Lives Remaining for Shock Totem, Ken Wood and John Boden asked me if I would be interested in writing a short Halloween remembrance for an upcoming issue of their magazine. I of course jumped at the offer and penned this fun little memoir about my greatest Halloween set-up: A Reel Splatter Christmas. Anyone who knows me knows that I harbor a bizarre obsession with Christmas, Santa in particular, and this is the story of how that obsession paired with Halloween night got me into some hot water in my conservative neighborhood.