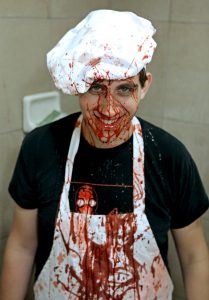 Mike Lombardo is a writer/director/FX artist who runs Reel Splatter Productions, a small independent film troupe based in Lancaster, PA. He grew up on a steady diet of Goosebumps books, 90’s Nickelodeon, and could most often be found stalking the horror section of the local video store searching for the most grotesque and bizarre movies he could get his hands on. In addition to filmmaking and FX, he occasionally writes short fiction which can be found in several anthologies and you can hear him ramble live as one of the co-hosts on The Horror Show With Brian Keene podcast. Along with artist Chris Enterline, he is the creator of the Hellraiser themed webcomic Cenobun.

He is responsible for judging and hosting the Horror Night section of the Lancaster International Film Festival, serves as a judge for the Scares That Care Film Festival, and a served as a member of the jury for the 2017 Splatterpunk Awards alongside Brian Keene, Wrath James White, David J. Schow, Gerard Houarner, Monica J. O’Rourke, and Tod Clark. In October of 2017, he was a guest speaker for Girl Scout Troop 40210 and assisted them with shooting their first short film, The Girlie Massacre, earning him not only a Digital Moviemaker merit badge, but also induction as an honorary Girl Scout. He wears the title proudly and hopes to continue teaching younger generations about filmmaking.

He recently completed his first feature length film, I’m Dreaming of a White Doomsday: a post apocalyptic Christmas movie best described as “The Road meets Miracle on 34th Street“. This film will be premiering on the film festival circuit Fall of 2017.

If you would like to find more of his insanity, you can find him on Facebook, YouTube, Twitter, and on moonlit nights wandering amidst the ruins of defunct video stores mourning the death of physical media.